The Threepenny Opera @ The Birmingham REP 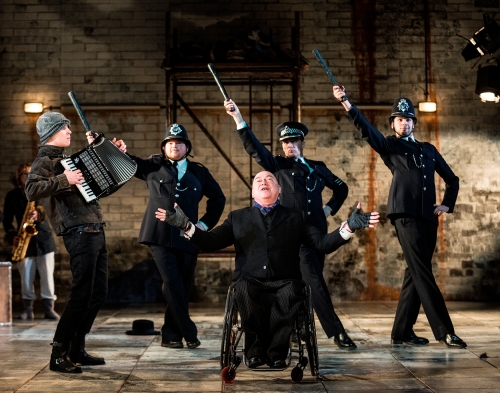 Before the performance began, the audience were greeted with a motley crew of cast members chanting “no ifs, no buts, no disability cuts!” in front of an, assumedly, once glamorous now tattered red show curtain thinly veiling an ensemble of musical instruments and actors milling around, preparing to perform the opera for the poor. Around the auditorium were banners spray painted with powerful messages such as ‘Keep your filthy tax out of my bedroom’ and ‘Old people are worth more than the pennies we give them!’ The rawness and unabashed nature of this introduction set the audience up to confront some uncomfortable and challenging world views, perfectly aligned with the original intentions of Brecht.

As the Musical Review aptly put it, the play was “no-holds barred”. From the adapted and highly satirised lyrics tarring ‘Tories and their minions’, paedophilic priests and Jimmy Saville with the same brush for their ‘sexual imperatives’, to the highly ironic song performed in a prison cell by Macheath (Milton Lopes) ‘Live Life in Luxury – That’s What it’s For’, the audience were presented with a vivacious performance that served its purpose in reinventing Brecht and Weill’s Threepenny Opera.

Almost every taboo imaginable was confronted in the performance, to the extent that some audience members were unsure whether to applaud or wince at the audacity of their presentation. For me, this only served to make it more enjoyable. The messages of the play were confrontationally presented by an awe inspiring cast, the majority of whom were disadvantaged – either in terms of their sight, mobility, hearing or their height. The casting was a stroke of genius; as the performance did not aim to make you feel sorry for the cast members, or empathise with them for their disadvantages; it aimed (and succeeded) to challenge and question the way our society works. It also demonstrated how extremely versatile the cast were, as the majority were not only actors and singers but also talented musicians.

Musically, the levels were sometimes a little unstable, and a few hiccups were had with the subtitles projected onto the walls, but these minor hindrances didn’t affect the overall experience to any substantial extent.

The success of this performance was enhanced for me by the extremely talented signers, with a special mention for actress and signer Jude Mahon. During the songs, she delivered as compelling a performance as the actors singing, and was remarkable in her ability to bring several different characters’ personalities to life through sign language; undoubtedly she captured the essence of the songs for deaf audience members. Other notable performances were given by Mrs Peachum (Victoria Oruwari), Polly Peachum (CiCi Howells) and Tiger Brown (Will Kenning), a chief of police who served in the army with the notorious but oh-so-charming murderer and rapist, ‘Mack The Knife’.

All in all, if you are looking for a theatrical performance that will challenge your views and beliefs, and prompt your thoughts towards questioning the structure and hierarchy of our society as it is today once you leave the theatre, this is the play for you. Utterly fascinating.