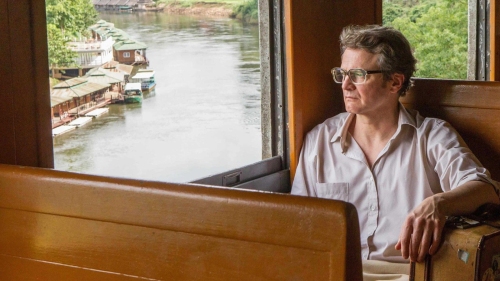 A raw, powerful, and, at times, shocking, film; The Railway Man details the real-life story of war veteran Eric Lomax, played by Colin Firth, as he struggles to deal with the horrors of his mistreatment at a Japanese prisoner of war torture camp, some twenty years after he was subjected to immense torture tactics. It is based on the memoirs written by Eric Lomax himself, and was directed and adapted by Jonathon Teplitzky.

The film often jarringly juxtaposes the two distinct sections of Eric Lomax’s life. The film begins on a quaint, jovial note, as we see Eric meet Patricia, his soon-to-be wife, played by Nicole Kidman, on board a train heading towards Scotland, a mode of transport for which it is very quickly clear that Lomax has a particular affinity for. However, their idealistic, and clearly joyful marriage, is quickly brought to a halt by the appearance of flashbacks of his horrendous time in the war. It is here that Firth’s portrayal of Lomax is particularly poignant, and cements his standing as one of the most emotionally affecting actors of his generation. Being mostly known for more sarcastic, romantically-swayed roles (read: Bridget Jones), Firth’s depiction of Lomax’s utter inability to cope with the terrors of his earlier life is distressing, disturbing, and utterly heart-breaking, and something I, many years in the future, can only imagine to be an accurate dramatic portrayal of the pain experienced by the men who endured something similar in the atrocities of war.

Jeremy Irvine does perhaps one of the film’s best jobs as he plays a younger Eric Lomax, in flashbacks used to explain to the audience what it is that the film’s protagonist experienced. Such information is learned along with Lomax’s wife Patricia, whose distressed and upset reaction is often one that mirrors that of the audience. It is Irvine’s excellent and shockingly accurate mimicry of Firth that aligns the two physically different characters with the same experience. Irvine manages so superbly to embody Firth’s character in his youth that you could be mistaken in thinking it was Firth himself, in his younger years, enacting the same role. However, the film is muted and slow in its depiction of exactly what Lomax was exposed to and, as such, it is difficult to ever fully attempt to understand the true extent of Lomax’s torture.

However, the film’s over-arching issue emerges as the past begins to catch up with Eric, and he begins to realise that he must face the realities and the injustice of what happened to him all those years ago as, Nagase, often portrayed as the perpetrator of many of the horrific acts against Lomax, has been found to be alive by Eric’s best friend and fellow war veteran Finlay. In one of the film’s most dramatic and upsetting scenes, Finlay is seen hanging himself from a railway bridge, in a poignant union of two major obsessions in Eric; the war, and railways. The meaning of the death is left ambiguous, leaving the audience wondering whether it was solely a means of encouraging Lomax to hunt down Nagase as a means of closure, or a desperate attempt to end Finlay’s own internal torture formed at the hands of the war. Either explanation adds to the incredible tension and sadness of the film, as it once again reaffirms the reality of the horrific effects of the war, long after it has come to an end.  It similarly reiterates the importance of Eric’s situation, and the magnitude of the choice between revenge and forgiveness, in the face of his life-long enemy.

A film that is ultimately about the need for closure and forgiveness, The Railway Man may not possess many of the loaded, highly dramatic scenes of other war films, but it is here that I believe its strength lies. It focuses more on the bonds that are created during war, for better or for worse. For this reason, I believe the film and the cast were utterly overlooked for awards season – particularly the cast, who do the most to make this film the powerful, emotional depiction of war it is.