The Best in Live Stand-up Comedy @ The Glee Club 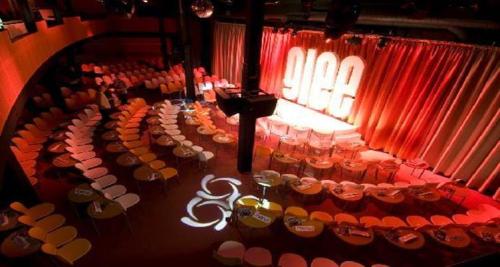 One of Birmingham’s best loved comedy nights is definitely at the Glee Club; situated in the Arcadian only a few minutes’ walk from New Street station and so is easily accessible by train. The Arcadian itself, however, is nothing like New Street or the Bull Ring. As a London lover, the Arcadian, though small, reminded me of a cross between Soho and Camden; with its quirky boutique stores, individually owned restaurants and interesting bars. In stark opposition to the hyper-commercialised nature of the majority of our city, the Arcadian is something just that bit different. Walking down the street toward the Glee Club you feel the atmosphere, and when I went I was kicking myself that I had not left enough time to eat at one of the restaurants as they all looked and smelled amazing. The Arcadian also boasts night clubs, and so is a different night out for those who are bored of Risa and Gatecrasher.

The Glee Club itself is a great place for an evening out that doesn’t revolve around the same clubs on Broad Street. We arrived early in order to soak up the feel of the place and waited in the lobby. Although it looks small, you feel as if you are in a secret little bar tucked away from everyone. The dim red lighting, comfortable armchairs and relaxing music makes everybody feel at ease. There was a bar here, but we decided to wait to get a drink in the room where we would be viewing the main performance. Once doors opened, we were quickly and efficiently taken to our seats and shown a menu. The room boasted a menu of averagely priced drinks, (around three pounds for a pint and four for a glass of wine) but it was the food on offer that really impressed me. There was a large selection and all at very competitive prices. The service of the waiters and waitresses is one of the quickest I have ever seen.

Around an hour after we arrived, the compere came on stage; a Mr Mikey D. I had not previously heard of any of the comedians performing on the night, but all were hilarious and had us in stitches. Mikey D was an Australian man who used accents hilariously and interacted with the audience, but only those who wanted to be interacted with (he didn’t pick on people). After a twenty minute set, he introduced the next comic, Ivo Graham. In his mid-twenties and with a posh London accent he reminded us both of Jack Whitehall, but was hysterical in his own right. Following this there was an interval, and then the other two comics, Carey Mark and Josh Howie performed. Every single comedian on the night was of a high quality, and even if they do not yet have high fame levels, I’m sure one day they will. The glee club also books incredibly famous comedians; Russell Howard has performed there and the legend that is Lee Evans is set to perform later this month.

Going to the glee club for the stand-up comedy night was an excellent evening out. If you want to eat, drink and laugh at the same time, I would definitely recommend it!