After almost a year in the making, University of Birmingham’s musical theatre society, GMTG, are unveiling their take on the eight times Tony Award-winning musical Spring Awakening on 26th November. Fans should be aware that Broadway’s rock and roll musical has been transformed into a piece of expressionistic physical theatre, complete with surrealist costumes, live-art and video projections. I talked to artistic director Jake Dorrell to discover what inspired this creative process. 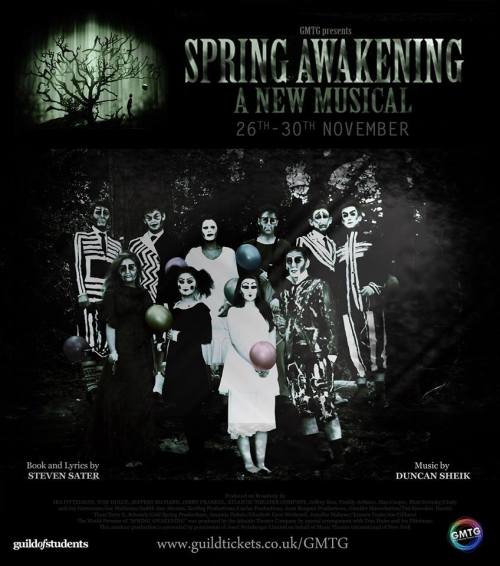 The musical is based on Frank Wedekind’s original 1891 play, which explores the awakening of sexuality and identity in a group of confused young teenagers and criticises the sexually-oppressive culture of 19th century Germany. Due to its controversial subject matter, including rape, child abuse, homosexuality, suicide, and abortion, the play was often censored or banned outright. Jake described how he completely fell in love with the story but found the successful 2006 Broadway version, which starred Glee’s Lea Michele, insulting, stating that ‘it completely sexualises it’ and that ‘it’s funny when it shouldn’t be funny. I’ve forbidden the cast from watching it on YouTube!’

His interpretation of the musical focuses on the strange surreal world of adolescence that the teenagers are entering and projects that world onto the stage. Thus, you are ‘not supposed to leave thinking you’ve seen a play- it’s like stepping into a moving art installation.’ Jake has drawn on German expressionism, in which the set looms around the spectator, and is using two enormous projections to surround the audience and help them to see from a child’s perspective.

‘This summer I nearly ran away with the circus’ Jake suddenly declared, and after a hilarious anecdote he revealed that the show’s costumes are heavily influenced by the circus and clown make up: ‘Lucien Freud meets Cirque du Soleil!’ All of the costumes are hand-made and hand-painted by Maysie Chandler and everything has been sourced individually. Jake described how he found himself struggling home from the rag market carrying hula hoops, wadding and vintage clothes.

Indeed, the effort put into the production by cast and crew is incredible. Jake described the initial audition process as ‘torturous’; it took five days and included four-hour-long physical theatre workshops. In stamina classes, the cast are pushed to their limits: ‘they leave dripping with sweat and can’t walk for days,’ Jake says half-jokingly and pauses before adding with a laugh ‘I’m probably a bit of a nightmare to work with!’

The production also draws on the personal experiences of gay, bisexual and pansexual students and the LBGTQ society played a part in talking to the cast about ‘what it’s like to be different’. Jake wanted to ensure that all issues in the play were thoroughly explored and that the finished piece was ‘meaningful’. Local transgender arts, teenage suicide, and depression charities have been invited to collect donations after the show- highlighting the reality of the play’s issues to the audience. As summed up by Jake, GMTG’s production is a ‘social message conveyed artistically’.

Overall, Jake tells viewers not to expect a cheesy, jazz-hands musical. Nor is it a family show, given its explicit sexual content. He advised people coming to see it to be ‘be incredibly open-minded’ and to ‘expect the unexpected’ before announcing ‘we’re doing things that have never, ever been done before. I’m excited!’

Tickets are available now at http://www.guildtickets.co.uk/GMTG

This entry was posted in Previews and tagged expressionism, GMTG, Musical, Spring Awakening, university of birmingham. Bookmark the permalink.