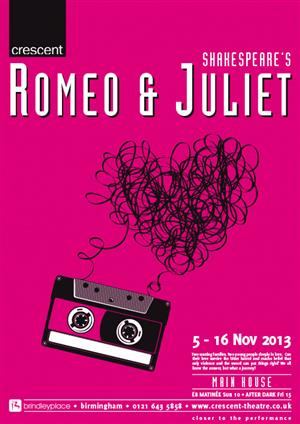 If there is one problem with a staging of Romeo and Juliet is how do you escape the major Hollywood film productions of the play and reinvent it to pander the majority of the audience and equally shock them too.  With such a broad task at hands it’s safe to say that any production will succeed in some areas than others.

Kate Owen’s (the productions director) decision to reinvent the play through setting it in the late 1980’s/ 1990’s period allowed a different type of hedonism to be displayed on the stage here. Lady Capulet’s slow sauntering and somewhat aloof attitude towards Juliet and Lord Capulet struck out in the production, alongside her casual use of cocaine throughout most scenes she shared with her daughter.  The eclectic music choices and stage costumes encapsulated the age of social distress in the 1980’s which Owen’s make comparisons to between Montague’s and Capulet’s’ feud.

Taken further Andrew Elkington’s Romeo was a hybrid mix of a young Leonardo Dicaprio’s emotional rawness and the extravagance of a young George Michael. At times playing the typical archetypal young lover, who is rash and often emotionally open, but with an added elegance and sophistication. The George Michael influence on his character went further than the typical 1980’s hair style and tight jeans, and allowed vigour in his performance carrying him through some of the more turbulent scenes in the production.

And not to forget Juliet played by Hannah Kelly who seized the stage in many of the scenes often outshining both Romeo and the nurse with her emotional ferocity which she carefully maintained beneath a thin layer of her self control. Owen’s played on the naivety of Juliet especially earlier on the production with her often comical discussions with her nurse. But as the play progressed we see Juliet blossom into a woman who decides to take control of her fate leading to a tragic end.

But the star of the show was Mercutio played by James David Knapp who captured our attentions from his first scene to his last. His witty innuendos entwined with his seriousness makes for a complex and enjoyable character to watch being performed. Owen’s clever deconstruction of Mercutio’s Queen Mab speech was particularly interesting. Through a backdrop projection of images of soldiers fighting in the Falkland’s war, Mercutio recites his Queen Mab dream, adding an extra layer to his emotional and mental eccentricities creating a disturbed picture of his condition. These mental eccentricities of Mercutio are what at times drives the production away from a typical reading of the play into a more exciting experience for the audience.

Romeo and Juliet is the most accessible Shakespeare play for the masses due to our timeless fixations on everlasting love and dying to save that. With this in mind it’s not hard to see why the theatres are always packed to see this play around the country.  It remains relevant for all ages everywhere and in the process it’ll still illicit a few pained sobs and tears at the tragic end even to this day.