In the second gallery of the Eastside Projects building, hemmed in by wooden panels and abstract grey portraits, Hooky Street Press hosts a symposium upon humour and seriousness in art writing. Alternative youths sporting chunky knitwear, piercings, hair dye and dreadlocks are scattered in the audience, amongst their more sophisticated elders.

Gavin Butt begins the talk with a straightforward dissection of the humour-seriousness dilemma, using a quote from Charles Ludlam: ‘Now the whole idea of seriousness is awful to me – it sounds like something imposed from without. It doesn’t really imply gravity or profundity; it implies decorum, behaving yourself.’

Butt explains that society views ‘significant’ things through the lens of seriousness because we believe it is the only way to attribute value and prove our commitment. However, this has become so common that it now sounds more like ‘bloated pronouncements of value’ than genuine feeling. He asks whether we can separate ‘gravity and profundity’ from seriousness. Exampling Joe Brainard’s art, Paul Morrisey’s film Women in Revolt, and performance artists Kiki & Herb and David Hoyle, he demonstrates society’s confusion when faced with blended solemnity and comedy.

David Burrows proceeds with the point that ‘there’s a seriousness to humour’, recalling a performance artist who dressed as a soldier and lay ‘dead’ in the streets of Birmingham for a whole week. According to Burrows, ‘he points out the fact that the whole world is 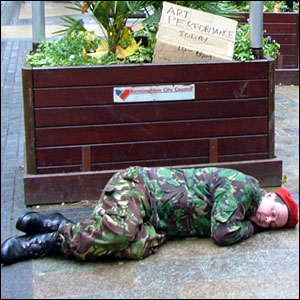 wrong’, underlining the irony of the show as criticism of war itself.

Andrew Hunt’s talk on Jacques Lacan has me utterly lost. He dons a mask that makes him look like a cartoon psychopath, and launches into a complex rant about the ‘discourse of the university and the master’. Milkshake by Kelis plays during an animated slideshow. I don’t quite know what to make of it, but the basic point I gather is that one’s unconscious desires are barred by the rules of society; a hysteric will show the ‘truth’ of these desires by denying ‘knowledge’ of culture.

An interesting but unnecessarily extravagant ‘symposium’, and appropriately enough by the end, I’m not sure whether to laugh or frown.